Polyethylene’s toughness and chemical resistance, as well as its corrosion resistance and lightweight, have contributed to its increasing use in situations requiring cost-effective and durable fluid and gas piping systems. According to a press release from the Plastics Pipe Institute, “PE piping has been used in Europe and America for water and other fluids since the 1950s due to its durability, leak-free joints, corrosion resistance, and long-term cost-effectiveness.”

Butt welding, electrofusion welding, socket welding, or extrusion welding can all be used to join HDPE pipes. These joints heat the pipe during the joining process, resulting in an entirely homogeneous joint that is as strong as, if not stronger than, the existing pipe on either side of the weld. There is no need for rubber seals or jointing chemicals, which are used to join PVC pipes and contribute to environmental toxicity and increase the likelihood of failure over time. According to the suppliers of HDPE pipe, PE is less prone to root intrusion and maintains the pipeline’s integrity even when installed in unstable soils. 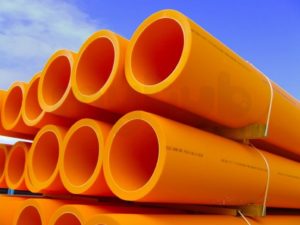 Since the fusion welding system eliminates the need for anchors or thrust restraint blocks, the joints become fully end-load resistant, lowering material and installation costs. This also enables future excavations closer to the pipeline to be safer, which is critical for high-pressure gas pipelines. Trenchless installation with coils of PE pipe is safer and less intrusive on the surrounding environment.

HDPE pipe systems can be used in a variety of applications, including standard trenching for water mains, fire ring mains, sewer mains, and gas mains pipelines, as well as horizontal drilling for electrical and telecommunications conduits. According to a manufacturer of HDPE systems, HDPE systems are cost-effective to install, have low long-term maintenance costs, and enable the use of less expensive installation techniques such as HDD (horizontal directional drilling), slip-lining, pipe bursting, floating, and submerged pipe.

HDPE pipe is extremely durable and flexible and can be bent on-site to a radius of twenty-five times the nominal pipe diameter (for SDR11 and SDR17 pipe) at or below the ambient temperature of twenty degrees Celsius. This results in significant cost savings when compared to other pipe systems, which require glued fittings, restraints, or thrust blocks for even minor direction changes. Due to HDPE pipe’s high impact resistance and flexibility, it is well suited for installation in dynamic soils, including those prone to earthquakes. Due to its smooth bore and end-to-end jointing methods, HDPE pipe has an extremely high flow capacity. HDPE pipe does not corrode in the environment and retains its flow characteristics over time, in contrast to ferrous piping systems, which rust and develop internal resistance to fluid flow.

Because HDPE pipes are constructed from virgin food-grade polythene, they are safe for the transfer of drinking water, provided that any initial debris has been flushed out. HDPE pipe is resistant to a wide variety of chemicals, allowing it to be used in process plants and in areas with corrosive or acidic environments without the need for protective coatings or galvanizing, as steel pipes require. Due to HDPE’s low thermal conductivity, it can maintain more consistent temperatures when transporting fluids than metal pipes, significantly reducing the need for insulation to control condensation around the pipeline.

Although HDPE pipe is frequently estimated to last 50 years, it is more likely to last 100 years. PIPA (Plastics Industry Pipe Association) and the Plastic Pipe Institute (PPI) have both published technical white papers on the design life of HDPE pipes. The PIPA paper is titled “Life Expectancy for Plastics Pipes,” and it states that due to the fifty-year stress regression data, some people incorrectly believe that plastic pipe systems have a fifty-year life expectancy. Indeed, these pipe systems are capable of lasting up to or exceeding 100 years.

PE pipes and fittings were introduced in the mid-1900s for irrigation and water supply applications, but also for gas, fuel, and other industrial applications. The use of this 50-year time interval creates the misconception that it represents a pipe life of 50 years. The actual life of properly manufactured and installed pipe systems cannot be predicted, but can be expected to exceed 100 years before major rehabilitation is required.