A Quick Guide To The Duct System’s Components

Duct systems are air delivery and removal passageways or conduits used in heating, ventilation, and air conditioning (HVAC). Duct systems deliver ventilation air in addition to supply air. As a result, air ducts help to keep the air in your home clean and comfortable.

Ductwork is another term for a duct system. Duct design is the process of planning (layout), sizing, optimizing, detailing, and figuring out how much pressure is lost in a duct system, as well as how much it costs.

Components of the duct system

Apart from the ducts themselves, complete ducting systems incorporate a variety of additional components.

A duct system is frequently initiated at an air handler. The blowers in the air handler can generate significant vibration, and the duct system’s large surface area would transmit this noise and vibration to the building’s occupants. To avoid this, vibration isolators (flexible sections) are typically installed in the duct immediately preceding and following the air handler. These sections are made of a rubberized canvas-like material that allows the air handler to vibrate freely without transferring much vibration to the attached ducts. The same flexible section can help cut down on noise when the blower is turned on and positive air pressure is brought into the ductwork.

The supply air trunk duct will frequently fork downstream of the air handler, supplying air to numerous individual air outlets such as diffusers, grilles, and registers. When a system is designed with the main duct branching off into numerous subsidiary branch ducts, take-off fittings allow a small portion of the flow in the main duct to be diverted into each branch duct.

Take-offs may be installed in circular or rectangular openings cut into the main duct’s wall. Typically, the take-off has numerous small metal tabs that are bent to connect it to the main duct. Round fittings are referred to as “spin-in fittings.” Other take-off designs use a snap-in attachment method, which is sometimes combined with an adhesive foam gasket for better sealing.

Ducts, particularly in homes, are frequently required to allow air to travel vertically through relatively thin walls. These vertical ducts are referred to as stacks and are made up of extremely wide and relatively thin rectangular or oval sections. A stack boot connects an ordinary large round or rectangular duct to the thin wall-mounted duct at the bottom of the stack. At the top, a stack head can be used to reconnect to standard ductwork, while a registered head can be used to connect to a wall-mounted air register.

Frequently, ducting systems must include a mechanism for adjusting the volume of airflow to various components of the system. This function is provided by volume control dampers (VCDs; not to be confused with smoke or fire dampers).

Apart from the regulation provided at the registers or diffusers that distribute air between rooms, dampers can be installed within the ducts themselves. These dampers may be manually operated or automatically operated. In simple systems, zone dampers provide automatic control; in more complex systems, variable air volume (VAV) provides control. 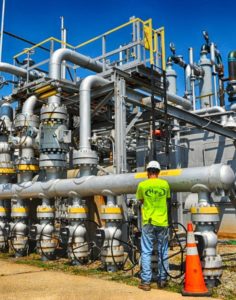 Smoke and fire dampers are typically found in ductwork that passes through a firewall or fire curtain. A motor, referred to as an actuator, is used to drive smoke dampers. A probe connected to the motor is installed in the run of the duct to detect smoke, either in the air being extracted from or supplied to a room or in any other location along the run of the duct. Once smoke is detected, the actuator closes the smoke damper automatically until it is manually reopened.

Fire dampers are located in the same locations as smoke dampers, depending on the intended use of the area immediately following the firewall. They are not activated by any electrical system, in contrast to smoke dampers (which is an advantage in the case of an electrical failure where the smoke dampers would fail to close).

Turning vanes are installed within ductwork at direction changes (e.g., 90° turns) to reduce turbulence and resistance to airflow. The vanes guide the air, allowing it to more easily follow the direction change.

Plenums are the HVAC system’s central distribution and collection units. The return plenum transports air from a collection of large return grilles (vents) or bell mouths to a central air handler. The supply plenum directs air from the central unit to the rooms that the system is designed to heat or cool. They must be meticulously planned into the ventilation design process.

While single-zone constant air volume systems typically do not include these, multi-zone systems frequently do. Typically, each thermal zone has a single terminal unit. Terminal units come in a variety of configurations, including VAV boxes (single or dual duct), fan-powered mixing boxes (in parallel or series configurations), and induction terminal units. Additionally, terminal units may incorporate a heating or cooling coil.

Air terminals are the outlets for supplying air and the inlets for return or exhausting air. Diffusers are most frequently used for supply, but grilles and, for very small HVAC systems (such as those found in residences), registers are also frequently used. Although return or exhaust grilles are primarily used for aesthetic purposes, some incorporate an air filter and are referred to as “filter returns.” For more details, you may contact duct manufacturers in India. They will be more than happy to answer your questions.